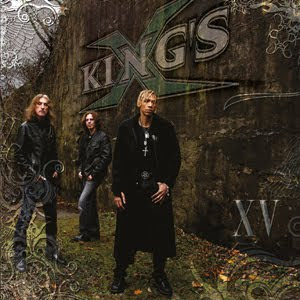 King's X - XV
2008, Inside Out
1. Pray
2. Blue
3. Repeating Myself
4. Rocket Ship
5. Julie
6. Alright
7. Free
8. I Just Want To Live
9. Move
10. I Don't Know
11. Stuck
12. Go Tell Somebody
13. Love and Rockets (Hell's Screaming)
14. No Lie
I have been a fan of King's X for a long time. I've bought each studio album when they came out and have usually been impressed with each one. Well, I wasn't sure about this one when it came out and I downloaded it to listen to it and see if I really liked it. Well for awhile I was pretty "meh" about the whole thing. I liked the songs but they really didn't seem to "wow" me. Then I put this disc on while at work and something clicked. I got it. For some reason all the songs and the elements came together and I said to myself, "Wow... this is a great CD." I bought shortly thereafter. So yes... this is a great CD. It's better than Ogre Tones that's for sure. There's no trace of their progressive metal/rock past but that's okay, now they just play good old hard rock...and that's alright by me!
Useless Fact: I'm not sure anyone is a Christian after listening to some of the lyrics for this one. Granted there's no angry diatribes or anything, it's more subtle. Though it does make me wonder where everyone stands these days. Still fantastic musicians no matter what! God bless them! Oh... and I'm not sure whether track 7 is supposed to be called "Broke" or "Free." It's "Broke" on my Ipod but "Free" on the CD case.
Posted by The Old Man at 9:08 AM