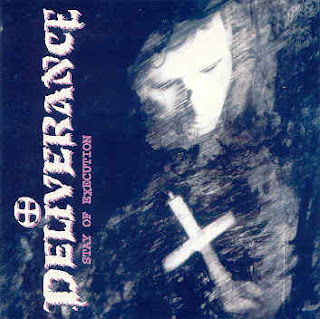 Word has it that this album started as a solo album of Jimmy Brown's but turned into a D disc at the behest of the record label and producer Terry Taylor (Daniel Amos). The new sound melds D's original heaviness with more melody and it's just the shot in the arm the band needed. Jimmy Brown is using a more melodic style of singing as well which many compare to David Bowie though I think it's just as much influenced by Terry Taylor's style. The lyrics have become a bit more poetic as well. "Ramming Speed" is a plodding metal tune that deals with the struggles of the Church as sailors on a galleon. For those who need speed there's "Entombed" a blistering track that recalls the previous offerings. I don't think we needed another version of "Weapons" but I can see why the label did it as the song was getting a lot of airplay on MTV at the time. Stay has just been reissued by Roxx Productions. The new version is remastered and includes extra tracks. The first two were included on the Temporary Insanity tribute album, while the last is a brand new version of "What a Joke" featuring Jimmy and George Ochoa together after twenty some odd years.

Useless Fact: "Horrendous Disc" is a Daniel Amos cover. It was quite a shock to hear it the first time with the pianos and choirs and all - but it's one of my favorite tracks from this disc.
Posted by The Old Man at 8:51 AM