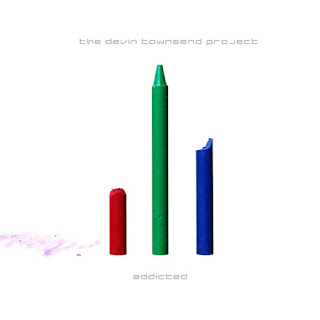 The Devin Townsend Project - Addicted
2009, Inside Out
1. Addicted!
2. Universe in a Ball!
3. Bend it Like Bender!
4. Supercrush!
5. Hyperdrive!
6. Resolve!
7. Ih-ah!
8. The Way Home!
9. Numbered!
10. Awake!
Hot on the heels of Ki comes Addicted. The absolute polar opposite of everything on Ki. Whereas that album was introspective and minimalistic, this one is a return to the "wall of sound/organized chaos" Devin is known for. This is also one of my favorite albums of 2009. Devin himself describes the album as "Ten rocking songs, no bulls**t." Devin has always had a talent for writing hooks, but he usually places them inside dense, progressive songs. I've always wondered how awesome it would be for him to just write an album full of simple songs and the results are astounding. What Devin has done is taken his heavy, epic style and in essence, produced the finest pop record ever recorded. Devin calls it "Enya-core" and that sounds like a pretty good description to me! Songs like "Bend it Like Bender!" could be played in a rave club and the ballad "Ih-Ah!" could be a hit on VH1 if it ever got played there. Of course you'll hear layers and layers of sound not unlike one of his previous albums, Synchestra. But the hooks...man, the hooks... they'll be stuck in your head for days on end. We also have the haunting vocals of Anneke Van Geirsbergen who's been on a couple Ayreon albums. She does all the vocals for this album's version of "Hyperdrive!" (originally on Ziltoid the Omniscient) and I think it's better than the original! If you're a fan of heavy, catchy music that's a blast to listen to... go buy this right now!
Useless Fact: Yes, the song titles are supposed to all have exclamation points after them.
Posted by The Old Man at 9:31 AM