Coheed and Cambria - "Good Apollo, I'm Burning Star IV Volume I: From Fear Through the Eyes of Madness" 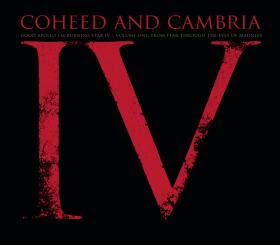 Coheed and Cambria - Good Apollo, I'm Burning Star IV Volume I: From Fear Through the Eyes of Madness
2005, Sony BMG
1. Keeping the Blade
2. Always and Never
3. Welcome Home
4. Ten Speed (Of God's Blood and Burial)
5. Crossing the Frame
6. Apollo I: The Writing Writer
7. Once Upon Your Dead Body
8. Wake Up
9. The Suffering
10. The Lying Lies and Dirty Secrets of Miss Erica Court
11. Mother May I
The Willing Well:
12. I - Fuel for the Feeding End
13. II - From Fear Through the Eyes of Madness
14. III - Apollo II: The Telling Truth
15. IV - The Final Cut
I think this is probably my favorite Coheed album. Well... sometimes it switches places with the No World For Tomorrow depending on my mood. But there's no denying that Coheed is at the top of their game here. "Welcome Home" is a no compromise metal tune and probably the most recognizable tune as it's been used in ads for Rock Band and the movie 9. The other tracks are just as infectious and it doesn't take near as long for them to get where they're going. In fact, the only case of "aimless wandering" is in the four tracks at the end. I think these are a little overlong and don't really have any hooks or anything memorable. Almost like the songs are there just to tell the story and not the other way around. I do like "The Final Cut" though - it has a definite Pink Floyd vibe to it.
Useless Fact: A comic was made based off the story for this album which I have. I've read the comic and read the lyrics for this disc and I still don't know what the story is about. I think it has something to do with Claudio's girlfriend cheating on him and him using that event as a catalyst to complete his story... or something... crap it might be about fluffy bunnies in a meadow I don't know.
Posted by The Old Man at 9:11 AM