Deliverance - "As Above - So Below" 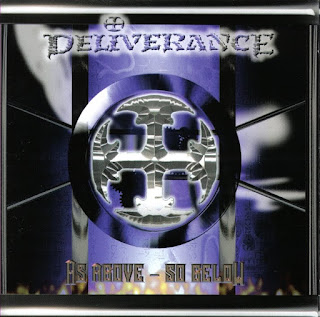 Deliverance - As Above - So Below
2007, Retroactive

This disc is a good meld of the past D heaviness with the more melodic tendencies of the later albums. Mike Phillips returns to fold for this one. It's full of chunky riffs and even some tracks that border on the old speed metal days like "Should We Cross Paths." But I don't know... I listen to this whole album and something seems... I don't know... off. It's good though. The songs are good and heavy - probably the heaviest thing they've done in a long while. I know I'll probably get a lot of crap for this but I'm going to go out on a limb and say this doesn't really sound like Deliverance. I can't put my finger on it though. I used to play this a lot when I first got it but not so much anymore.

Useless Fact: Jimmy got a lot of heat for using the phrase "As Above - So Below" because of its pagan connotations. It's actually more Jewish in origin though. Nolifetilmetal.com has a good discussion of the issue straight from the horse's mouth. Also: does anyone know what the heck the intro means? Sure would like to know...
Posted by The Old Man at 8:36 AM