Deliverance - "Weapons of Our Warfare" 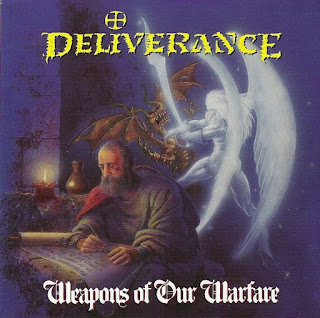 Deliverance - Weapons of Our Warfare
1990/2008 Retroactive

Rack up another metal classic for Deliverance! This one just takes everything that was great about the debut and cranks it up a notch. Most people consider this D's best album though I personally slightly prefer the debut to this one - but there's no denying that this is one metal monster. Most of the lyrics are inspired by Frank Peretti's spiritual warfare book. I have the rerelease version with the bonus track "Rescue." This was originally recorded for this album but left off because it doesn't sound anything like the rest of the disc. It's a great song and it's good to have it here but they're right, it doesn't fit at all.

Useless Fact: The rerelease has an updated cover which I did not post because I don't like it. I thought the original was a classic and I don't think they improved it any.
Posted by The Old Man at 8:29 AM