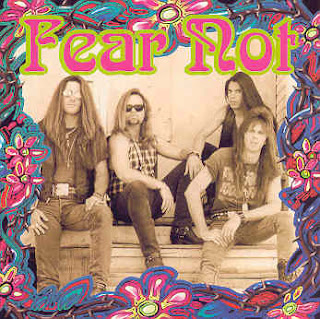 Fear Not - Fear Not
1993, Pakaderm
1. Give It Up
2. We Have a God
3. Mr. Compromise
4. Till the End of My Days
5. Suicide Sunshine
6. Money Money
7. Easy Come Easy Go
8. There is Love
9. Mad World
10. Take Hold
Man... Fear Not missed fame by a mere three years. If this had come out in '89 or '90 Fear Not would have had a longer career. The band is basically the Christian version of Skid Row, but man, they do it well. All the guys have talent and the songs have hooks you could catch Leviathan in! I will say the songs title are kind of dumb. It's like they were trying to pick the most cliche song titles they could. "Easy Come Easy Go?" "Money Money?" Um.... "Till the End of My Days?" Yeah... pick up any rock album from the 80's and you'll see one of those titles.
Useless Fact: Fear Not used to be called Love Life and released an album called Goodbye Lady Jane. It was on Blond Vinyl records which was better known for indie post-punk bands.
Posted by The Old Man at 9:42 AM