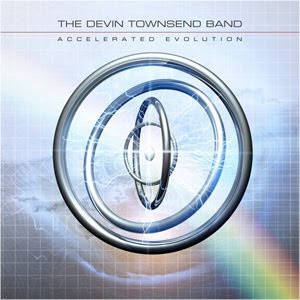 The Devin Townsend Band - Accelerated Evolution
2003, Inside Out
Disc One:
1. Depth Charge
2. Storm
3. Random Analysis
4. Deadhead
5. Suicide
6. Traveller
7. Away
8. Sunday Afternoon
9. Slow Me Down
Disc Two: Project Eko
1. Locate
2. Echo
3. Assignable
So after I got Synchestra I got to work on checking out the ol' DT back catalogue and Accelerated Evolution was the second disc I got. It's not nearly as progressive, though it does have some trippy, psychedelic tunes like "Deadhead" and "Away." The focus here I think is on hooks and groove and it's pretty cool. The big "wall of sound" I love so much is still here though not as much. The pounding drive of "Depth Charge" gets my blood pumping and the emotional "Storm" is one of my favorite Devin tunes off of any album. I was lucky enough to score the special edition with the Project Echo CD which is an experimental electronic series of songs.
I also picked up on the fact that Devin says "As above and so below" in "Away" after all the controversy Deliverance went through with their album title of the same name.
Useless Fact: All the songs on this album have to do with relationships.
Posted by The Old Man at 6:54 PM