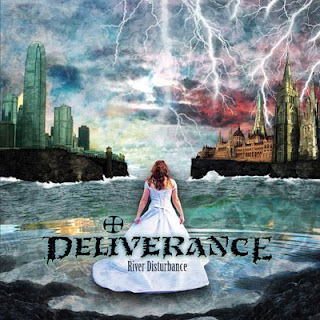 Deliverance - River Disturbance
1994/2007, Retroactive
1. Belltown
2. After I Fell
3. River Disturbance
4. Now & Then
5. Speed of Light
6. A Little Sleep (feat. 12th Tribe)
7. Map
8. You Still Smile
9. Breathing Still
Bonus Tracks:
10. I Thought
11. On the Fritz
12. Belltown (Hyper Remix)
13. A Word From Jimmy P. Brown, II
When this one came out a lot of people cried "sell-out!" Well... I don't know if I was one of them but I can say that I was disappointed with this originally. I'm not sure why. I guess it was just too much of a leap to make for me. After all we've got a fully acoustic song ("Now & Then"), a rap song ("A Little Sleep"), and a piano ballad ("You Still Smile"). I've grown to appreciate this disc more and more as I get older to the point where I can say this really is one of the best D albums out. I have the Retroactive edition with the bonus tracks. It's nice to have "On the Fritz" here and "I Thought" is an great track, I wish it would've been on the disc. Also, the recollections by Jimmy himself are interesting though not something you'd listen to over and over.
Useless Fact: According to Jimmy, the recording for this album took so long that Gene Eugene (Adam Again) who owned the studio eventually gave Jimmy the keys and said "Try not to break anything."
Posted by The Old Man at 9:30 AM