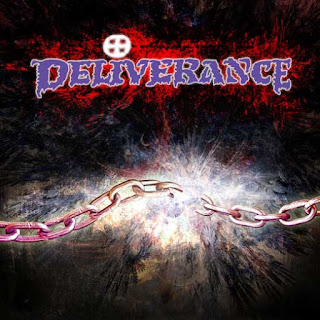 Deliverance's debut is, without a doubt, a classic speed metal album whether you're into Christian music or not. Band leader Jimmy Brown has admitted to aping Metallica's style on this album. Despite that fact, this album is hardly a Metallica rip-off. In fact, I would go as far as to say it's one of the most original speed metal albums ever. The songs are fast a furious with several being concert favorites to this very day. I have both editions of this CD but the cover pictured is the one for the Retroactive rerelease. I think it's better. What? You're saying you don't have this already? What the heck are you waiting for? Go get it... NOW!

Useless Fact: The bonus tracks, "A Space Called You" and "Attack," are from the California Metal compilation. If you're somehow reading this D review and don't know that... well... um... Hi, my name is Adam, welcome to Earth.
Posted by The Old Man at 10:51 AM