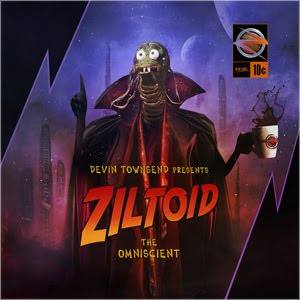 Devin Townsend - Ziltoid the Omniscient
2007, Inside Out
1. ZTO
2. By Your Command
3. Ziltoidia Attaxx!!
4. Solar Winds
5. Hyperdrive
6. N9
7. Planet Smasher
8. Omnidimensional Creator
9. Color Your World
10. The Greys
11. Tall Latte
Ziltoid the Omniscient tells the story of the fourth dimensional alien, Ziltoid, and his attempt to take over Earth, his search for the perfect cup of coffee, and his existential crisis. As you can probably guess this is pretty tongue and cheek, but the music is stellar. I would definitely count this among my favorites. I think is a good mix of all the sounds Devin has done over the years. There's some hooks, there's some pounding heaviness, there's some atmospheric stuff, and some pretty awesome riffs. Oh... I missed out on another two disc edition with this one. The second disc has some skits with Ziltoid on them, extra tracks, and a couple instructional videos.
Useless Fact: I thought I heard somewhere that Ziltoid was going to have his own talk show a la Space Ghost where celebrities would have to give Ziltoid reasons not to destroy earth. I wonder what happened to that idea?
Posted by The Old Man at 7:27 PM