The Crucified - "The Complete Collection" 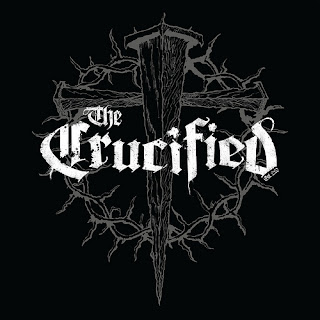 The Crucified - The Complete Collection
2009, Tooth & Nail
I've decided that I'm not going to replicate the tracklist for this collection. Why? Because when they say "complete," boy do they ever mean it. This three disc set (2 CDs, 1 DVD) contains every song The Crucified ever recorded, including two songs that were meant for the third album but never released. It would be too long a list so you're just going to have to search for it on your own. Okay on to the music: It's awesome. The first disc consists of the band's first demo when they were still called KGB. It's noisy and obnoxious. It reminds me, of all things, Lust Control. However, the first CD also has the Take Up Your Cross and Nailed demos. These are punk for the most part - pretty proficient punk if you ask me. There are some tracks, like "Seal Number Four" that foreshadow the band's move to thrash. The mastering on Take Up Your Cross is pretty good for it being a demo. However, the same cannot be said for Nailed which is pretty dang noisy making it hard to really hear the songs, let alone enjoy them. The tracks from Live at the New Order are similarly noisy. Despite my criticisms of the sound quality it's good to hear how The Crucified got their start. The two newest songs, "Straining Life" and "Power of God" were supposed to be on the third album. "Straining Life" is okay but I honestly didn't think it was anything special. "Power of God" on the other hand, is a blistering thrash tune that will remind you why you ever liked the band in the first place.
The second disc contains both the debut CD and Pillars of Humanity in their entirety. The debut is a landmark crossover album combining punk, thrash, and hardcore into an irresistible mix that caught the attention of metal heads around the nation. Even Sonny from P.O.D. cited the band as an inspiration. Pillars was more thrash than the debut. This edition has been remixed and it sounds amazing! On the old mix, everything was buried under Greg Minier's monster guitar tone. Here, the mix is much more even - you can clearly hear the vocals and the bass. It makes the whole thing much more listenable and actually made me like the album more than I did when it came out originally.
The DVD is decent. It's a collection of handy-cam shot concerts. The quality is poor but it's nice to see what kind of show the band put on. The concert footage is interspersed with candid scenes with the band on the road, hanging out, recording the third album, etc. It's nice to watch and reminisce but it's not probably something you'll watch over and over. I was watching it with my wife and she said, "You know, this movie makes all their songs sound the same," and she's right. Don't use this to try to turn someone on to the band who's not a fan already.
Also, the packaging is superb, with extensive liner notes and reflections from all of the band members. This is, without a doubt, the best retrospective of any band I've ever seen. It is worth the money, even if you already own both official albums.
Useless Fact: Geez you want more? Go buy the set and you'll have more useless facts than you could possibly want.
Posted by The Old Man at 9:59 AM