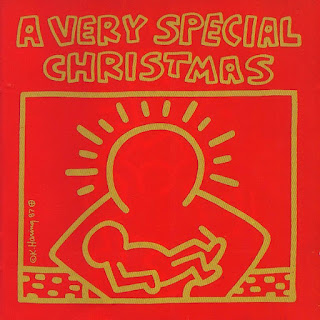 Various Artists - A Very Special Christmas
1987, A&M
1. The Pointer Sisters - "Santa Claus is Coming To Town"
2. Eurythmics - "Winter Wonderland"
3. Whitney Houston - "Do You Hear What I Hear?"
4. Bruce Springsteen and the E Street Band - "Merry Christmas Baby"
5. The Pretenders - "Have Yourself a Merry Little Christmas"
6. John Cougar Mellencamp - "I Saw Mommy Kissing Santa Claus"
7. Sting - "Gabriel's Message"
8. Run D.M.C. - "Christmas in Hollis"
9. U2 - "Christmas (Baby Please Come Home)
10. Madonna - "Santa Baby"
11. Bob Seger & The Silver Bullet Band - "The Little Drummer Boy"
12. Bryan Adams - "Run Rudolph Run"
13. Bon Jovi - "I Wish Everyday Could Be Like Christmas"
14. Alison Moyet - "Coventry Carol"
15. Stevie Nicks - "Silent Night"
Oh, man... so many good memories. I was pretty young in '87 so it's a wonder I actually remember some of this stuff. So many good songs on here though! Some of my favorites: Eurythmics' "Winter Wonderland" is probably my favorite version of that song. I've always loved the dark "Gabriel's Message." "I Saw Mommy Kissing Santa Claus" is pretty dang good too. Oh, and if Chuck Berry isn't singing "Run Rudolph Run" it might as well be Bryan Adams because I think he does a pretty good job. "Christmas in Hollis" is the coolest Christmas rap song ever, the video was pretty cool too if I remember. I don't care for anything Bob Seger does so his version of "Little Drummer Boy" is probably the worst of all the versions I've heard. I also can't stand Stevie Nicks doing "Silent Night" - NOBODY does that song better than Deliverance!
Useless Fact: This disc was a fund raiser for the Special Olympics. I think the proceeds still go to them if I'm not mistaken. So go out and buy one to support a good cause!
Posted by The Old Man at 8:30 AM