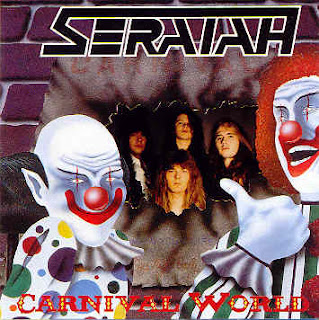 I was in sixth grade when this record came out. I remember because my grandfather used to take my cousin and I out to go Christmas shopping. He'd give us both $20 to buy present for everyone. Well, in true only child fashion my cousin and I bought the least expensive gifts we could find so we could get a tape with what was left over. Carnival World was one of those tapes I bought. I didn't know it at the time but these guys really do sound like early Motley Crue. I'd never heard early Motley Crue so I thought it was just good ol' fashioned metal. It's a great release with some pretty heavy songs ("Fallen Heart" for example). There's also the mandolin song "Let Him Take Control" that actually stays mandolin for the whole thing without morphing into metal. I didn't like it when I was little, but I really do now. Great disc if you can track it down.

I got to see these guys on the tour for their second album. They were pretty good, but the band that opened for them, called Evidence, was better.

Useless Fact: The band really changed direction after this disc becoming pop/rock with their second disc. Then two members went on to form Kid Promise - a laughable pop band that managed to survive for one album.
Posted by The Old Man at 9:26 AM