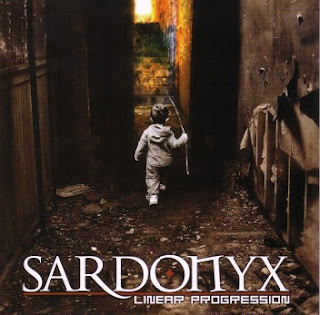 Sardonyx - Linear Progression
2005, Lightshine
1. Sing to the Lord
2. Master and My King
3. I'm Free
4. Power Unto You
It's been a loooooong time. A long time. And all we get is a four song EP?! Man! I guess beggars can't be choosers. Still... it's good to hear some new music from these guys. The second and third tracks are a little bit lighter in style than the power metal of Majestic Serenity but it's not a sell-out or anything. "Power Unto You" is a good old power metal tune just like the band was doing ten years ago. Now for my complaints... I like "Sing to the Lord" I really do but the opening riff is a direct ripoff of Disturbed's "Down with the Sickness." I mean... I was expecting David Draimen to pop in and do his "Oooh ah-ah-ah-ah" in the beginning. Also, in "I'm Free" there's a little voice over that is a little cheesy and I think it hurts the song. If by that third song the listener isn't aware why the band made the CD then no voice over is going to help them. Though even with my little nitpicky complaints, it's still great to get some new stuff. Hopefully we won't have to wait another decade or so for the next one!
Useless Fact: The band also released this one independently. They call the sound "worship metal."
Posted by The Old Man at 5:18 PM