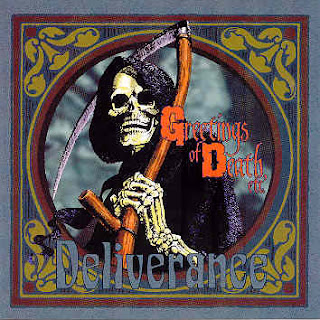 Deliverance - Greetings of Death, Etc.
2001, M8
1. Victory
2. Greetings of Death
3. No Time
4. J.I.G.
5. Speckled Bird
6. Awake
7. Attack
8. A Space Called You
9. Weapons of Our Warfare
10. This Present Darkness
11. Greetings of Death
12. Rescue
13. Slay the Wicked
14. Solitude
15. 23
16. Radio Interview 1992
I've never been a big fan of demos. I can never get past the sound quality to actually enjoy the music. Granted, this disc is leaps and bounds better than Back in the Day. I did enjoy hearing the Greetings of Death demo that started it all. I was surprised that "Speckled Bird" is a goofy country song, though! This disc also has "Attack" and "A Space Called You" as well as a bunch of Weapons demos. Most of these are instrumentals. I don't ever listen to this at all. Pretty much just have it to say I have all the D discs. Not bad, but not something the casual fan has to have.
Useless Fact: Retroactive rereleased this disc with the exact same cover art except that the D logo is now on it.
Posted by The Old Man at 10:55 AM