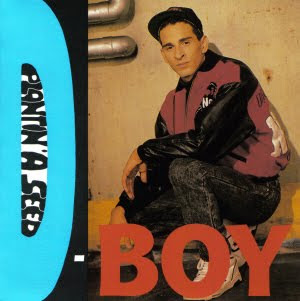 Oh look, D-Boy gets to be the very first rap album posted on this blog! D-Boy is pretty standard late 80's/early 90's hip-hop. You know the kind where everyone had overalls on with one strap hanging down? I like that kind of rap. It's fun. D-Boy is pretty fun too but I don't think his chops really show until track four. Up until then I think the rhymes aren't that great and the rap ballad (which I hate, rap should never have ballads) mucks up the momentum of the disc. It gets skipped every time. After that little hurdle, the album is quite pleasant. D-Boy's lyrics stop being so cliche and the beats are better. I like "Stompin' Satan" as it is an "accapella" beat box song with D-Boy rapping over it. It's cool.

Useless Fact: D-Boy made one more album before he was tragically gunned down. Luckily, he' in heaven and probably making better music than is humanly possible - so it's not all sad!
Posted by The Old Man at 7:35 AM