Fall Out Boy - "Infinity On High" 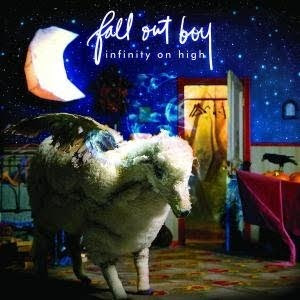 Okay... so the song titles are a little bit better this time. Anyway, the first time I listened to this album I didn't care for it much. I thought it was kind of hit and miss like the last one. However, one day my wife and I were coming home from a long trip and she was driving. I took the time to read the lyrics and as I did, my appreciation of this album increased exponentially. Granted, they're still pretentious and if they're not talking about failed relationships they're talking about the trappings of fame. Again... not deep - just young and stupid. That beings said there are some pretty clever turns of phrase here so I think that helped me like the music more. Almost to the point where I can say this is probably my favorite Fall Out Boy. I especially like "(Me & You)" and "Hum Hallelujah" though I'm not sure how I feel about them using God's name in a song about teen sex.