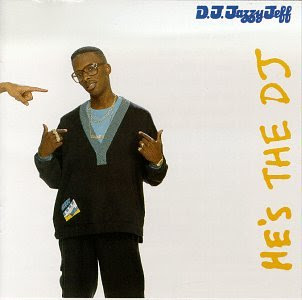 DJ Jazzy Jeff & The Fresh Prince - He's the DJ, I'm the Rapper
1998, Zomba
1. A Nightmare On My Street
2. Here We Go Again
3. Brand New Funk
4. Time to Chill
5. Charlie Mack (1st Out of the Limo)
6. As We Go
7. Parents Just Don't Understand
8. Pump Up the Bass
9. Let's Get Busy Baby
10. Live at Union Square (November 1986)
11. D.J. On the Wheels
12. My Buddy
13. Rhythm Trax - House Party Style
14. He's the DJ, I'm the Rapper
15. Hip Hop Dancer's Theme
16. Jazzy's in the House
17. Human Video Game
I have fond memories of playing The Legend of Zelda on the original Nintendo for hours on end with this disc as the soundtrack. So mainly I own this for nostalgia reasons. Truth be told I still pull it out more regularly than you'd think. A lot of people claim that grunge in the early 90's wrecked the market for good time rock 'n roll and I think gangsta rap did the same for hip-hop. Now I'm not a huge rap fan so you can take that with a grain of salt, but can you name one rap star today that's not about fame and bling or all hardcore? Yeah... thought so. This is just optimistic good-time hip-hop. And I don't care what anybody says, Will Smith is a fantastic MC. He's got a grasp of the English language that most rappers today could learn something from. It doesn't matter whether he's rapping about Freddy or trying to get a girl in bed, he's creative and classy. It goes a long way with me that he doesn't have to use the "F" word every two seconds. I don't care if that ruins his "street cred." A lot of people want to call rap poetry and this CD could be used as a good example. DJ Jazzy Jeff also knows his way around a turntable too. I'm not sure why the guys felt compelled to put the "live track" on there and there's a couple other tunes that are "instrumentals" that I don't care for. But I still like it even after all these years, Legend of Zelda or no.
Useless Fact: I remember having the tape of this and it had a song were the guys would sing "Too Damn Hype" over and over. There's no song like that on my CD. I wonder what happened? Does anyone know?
Posted by The Old Man at 7:47 AM