Fall Out Boy - "From Under the Cork Tree" 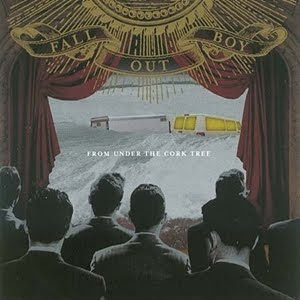 Fall Out Boy - From Under the Cork Tree
2005, Island
1. Our Lawyer Made Us Change the Name of This Song So We Wouldn't Get Sued
2. Of All the Gin Joints in the World
3. Dance, Dance
4. Sugar, We're Going Down
5. Nobody Puts Baby in a Corner
6. I've Got a Dark Alley and a Bad Idea That Says You Should Shut Your Mouth (Summer Song)
7. 7 Minutes in Heaven (Atavan Heaven)
8. Sophomore Slump or Comeback of the Year
9. Champagne For My Real Friends, Real Pain For My Sham Friends
10. I Slept With Someone In Fall Out Boy and All I Got Was This Stupid Song Written About Me
11. A Little Less Sixteen Candles, A Little More "Touch Me"
12. Get Busy Living or Get Busy Dying (Do Your Part To Save the Scene and Stop Going to Shows)
13. XO
What the heck is up with these flippin' song titles?! Ugh! Is there any reason they need to do that? It's not cool, it's not funny. It just comes off as pretentious. Of course, Fall Out Boy is a pretentious emo band so I guess this is par for the course. Despite the song titles, I do like Fall Out Boy even though they're the "trendy" band out now. What can I say? They write a good hook and have catchy songs. Their lyrics are all about soured relationships - so that's annoying. Like they think they're really deep when all they are is young and stupid. Oh well... I think this one isn't quite as good as some of the later ones which is the opposite of some critics. But I've never cared what critics think...
Useless Fact: The vocalist sucks live... like all of these emo bands.
Posted by The Old Man at 10:30 AM