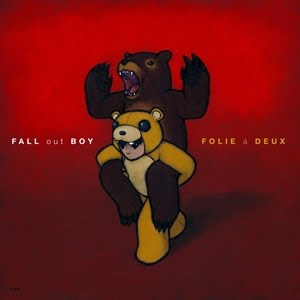 Fall Out Boy - Folie A Deux
2008, Island
1. Disloyal Order of Water Buffalos
2. I Don't Care
3. She's My Winona
4. America's Suitehearts
5. Headfirst Slide Into Cooperstown on a Bad Bet
6. The (Shipped) Gold Standard
7. (Coffee's For Closers)
8. What a Catch, Donnie
9. 27
10. Tiffany Blews
11. w.a.m.s.
12. 20 Dollar Nose Bleed
13. West Coast Smoker
Hmmm.... if you like Fall Out Boy, you'll like this. It's the same style - maybe with a few more dance/techno elements than the last albums. This one was a grower for me too like it seems like all FOB discs are. I like this better than Cork Tree but not as much as Infinity. They didn't include lyrics in this one but it sounds like it's the same crap they always write about. To tell you the truth I've had so much music around here lately that I haven't had the chance to give this one the attention that I've wanted. So I'll probably update this one again when I've listened to it more.
Useless Fact: I think there's supposed to be a Sarah Palin look alike in the "I Don't Care" video, but I don't think she really looks like Sarah Palin.
Posted by The Old Man at 10:52 AM