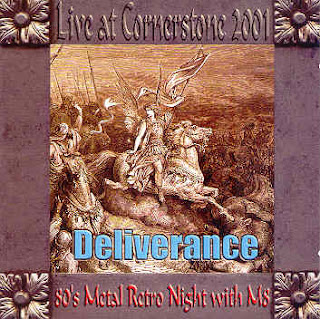 As big a fan of Deliverance as I am I'm ashamed to admit I never saw the guys in concert. Thankfully this disc is the next best thing. The band is tight and they play a good selection of songs from all eras of the big D. Jimmy can't quite hit the high notes like he used to, but still puts in a good vocal performance. Makes me wish I was there... I have a set list signed by all the band members that was given to me by a friend at college. Thanks Mac! I've still got it!

Useless Fact: I've heard that the band was upset by the "80's Metal Retro Night" stamped on the disc. I can understand why. This concert was supposed to be something new as the band was just about to release Assimilation. Not to mention that only one or two of these songs were actually written in the 80's.
Posted by The Old Man at 10:43 AM