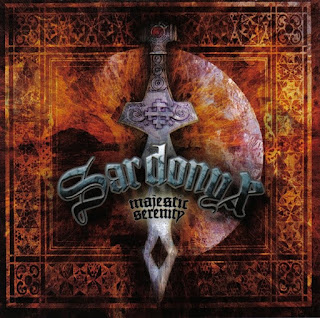 The first encounter I had with Sardonyx was when they opened for Whitecross at some school in Pennsylvania. I was impressed because they were pretty heavy and had a nice crunch to their guitars. I signed up for their newsletter and got their demo Rebel of Reason. I wore that tape out! These guys are pretty awesome. When Majestic Serenity finally came out I made sure our local Christian bookstore ordered some so I could get it. It did not disappoint. "Corridor to Light" is an amazing metal journey into the afterlife and "Royal Honor" is a cool metal worship song. I also like "Holy Avenger" and Sardonyx's answer to Metallica's "Fade to Black" called "Call Upon the Master." Granted the latter song's slow verse/heavy chorus is a little derivative but I still like it. I have the Retroactive version that's been remastered but I can't really tell the difference between this one and the old one. The cover is way better though. It's also nice to have Rebel of Reason on CD though it seems like it was pulled off a worn tape. The sound suffers on "Scandal" and "Rebel of Reason." If you haven't ever had a chance to hear these guys, now is the time to check 'em out.

One thing I really respect about these guys is their stance on ministry. They are a ministry band. Period. They weren't a bunch of guys who couldn't cut it in the secular realm, they weren't interested in becoming Christian rock stars, they just wanted to do ministry. I also liked that they bucked convention by not signing to a major label.

Useless Fact: Sardonyx funded the recording of this album themselves specifically so that when it was paid off they would be able to give it away free as a ministry resource. I think that's pretty cool.
Posted by The Old Man at 4:59 PM