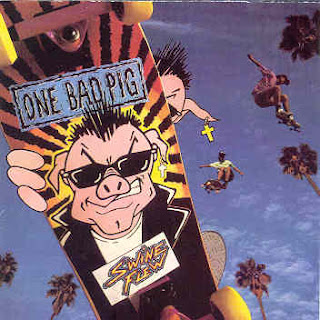 Wow... talk about a mislabeled band. One Bad Pig were billed as punk by pretty much everyone who had no idea what punk was. Sure they had the whole skating/punkish image going on and the music has some occasional punk leanings but it's really hard rock that sometimes straddles the line between metal. Oh... one reason it's not punk is that the guitar is way too awesome. There's some awesome riffs and leads that'll make your jaw drop. The Pig also pulls off some really melodic songs like "Red River" and "When Your Love Died." "Judas' Kiss" is a cool metal cover of the original Petra song. Carey Womack's vocals may take some getting used to because they're sort of a cross between the guy from The Clash and a stuck pig.

Useless Fact: The band got their name when one of the members saw a drawing of a pig on someone's hat or shirt or something and said, "Whoa, that's one bad pig!"
Posted by The Old Man at 9:03 AM