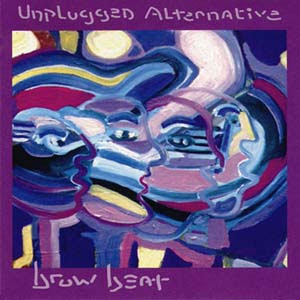 Various Artists - Brow Beat: Unplugged Alternative
1993, Alarma
1. The Choir - "Wilderness"
2. Poor Old Lu - "Drenched Descent"
3. Michael Knott - "Deaf and Dumb"
4. Terry Taylor - "Will Have to Do For Now"
5. Dig Hay Zoose - "Keep Me In Mind"
6. The Throes - "Monday World"
7. Lost Dogs - "No Ship Coming In"
8. Mortal - "Bleeder"
9. LSU - "Crack"
10. Undercover - "Symbol"
11. Adam Again - "Don't Cry"
This is a nice little compilation. Some of these songs have appeared on official albums in more electric forms. All of them except "No Ship Coming In" are different enough that you won't just skip over them. Moreover there's a nice amount of songs that you can't find on any album that I know of. I think a few of them were recorded just for this comp. "Drenched Descent" is probably one of the best songs that Poor Old Lu ever did! I also like the loungey/jazz sound of "Keep Me In Mind," another exclusive. If you like any of the bands here, you'll like this disc no question.
Useless Fact: Mike Knott from LSU painted the cover. He paints a lot of covers.
Posted by The Old Man at 8:38 AM