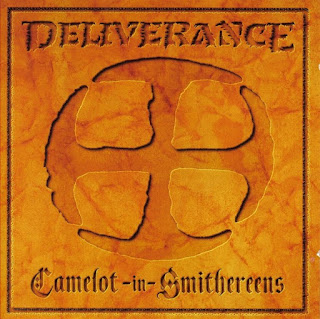 Ah.... Camelot-in-Smithereens... the dream blown to bits. That's kind of the idea for what would be D's last studio album for awhile. This is heavier than the previous disc but still in the slower melodic style of Learn. I like this one a lot too. Really, there isn't any D album I don't like! "Beauty & the Beast" is a David Bowie cover. This is also the first disc in awhile without Terry Taylor at the helm. I'll also take this opportunity to praise Manny Morales' bass skill. He's really got his own thing going on and makes the later D albums more interesting.

Useless Fact: This was supposed to be a concept album with a big booklet and sound bites in-between songs. The record company, in their infinite wisdom, deleted the sound samples and didn't print the book - leaving us with an album that you'd scarcely even know was a concept album. I think it's about time Retroactive got on this and restored the album to its rightful state.
Posted by The Old Man at 9:41 AM