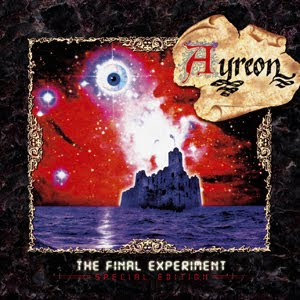 Ayreon - The Final Experiment
2005, InsideOut (rerelease)
1. Prologue
a. The Time Telepathy Experiment
b. Overture
c. Ayreon's Quest
2. The Awareness
a. The Premonition
b. Dreamtime
c. The Awakening
3. Eyes of Time
a. Eyes of Time
b. Brainwaves
4. The Banishment
a. A New Dawn
b. The Gathering
c. The Accusation
d. The Banishment
e. Oblivion
5. Ye Courtyard Minstrel Boy
6. Sail Away From Avalon
7. Nature's Dance
8. Computer Reign (Game Over)
9. Waracle
10. Listen to the Waves
11. Magic Ride
12. Merlin's Will
13. The Charm of the Seer
14. Swan Song
15. Ayreon's Fate
a. Ayreon's Fate
b. Merlin's Prophecy
c. Epilogue
So by the time I got this CD I had been listening to nothing but Ayreon for weeks. Needless to say, this seemed like a step back. Granted, it's got all the elements - an epic story, lots of guest appearances, progressive songs - but it just didn't make an impression. I've listened to this a few times and I still can't remember any song in particular. Not only that, but I never have any desire to go back to it. I suppose if you heard it when it first came out that would be one thing, but hearing this after masterpieces like Electric Castle and The Human Equation it just seems like there's not anything really special here. The edition I got comes with a second CD with a bunch of tracks sung by different vocalists and I'm too lazy to list them because the track list for this disc is too long as it is!
Useless Fact: When Arjen Anthony Lucassen originally shopped this to record labels, they would touch it with a ten foot pole! He's reprinted some of the rejection letters he got in the tray of the CD. It's pretty interesting.