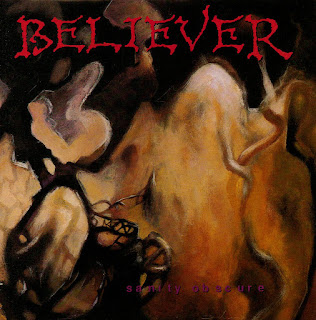 Believer's sophomore album continues in the same vein as Extraction, offering up solid technical thrash with a finesse that would make most other metal bands envious. I think the guitar tone is a little bit fatter here which makes the whole album sound just a smidgen heavier than the debut. Not that I'm complaining! "Dies Irae (Day of Wrath)" is a cool opera/thrash mashup with a female vocalist singing entirely in Latin. If that wasn't cool enough, there's also a cover of U2's "Like a Song." How many metal bands have the testicular fortitude to even attempt to cover a U2 song? And not only do they "attempt"... they friggin' slay that song! It's one of the highlights of the album. This disc has been rereleased recently so it shouldn't be that hard to find. And find it you should - because it's awesome.

Useless Fact: The rerelease contains an old track, "I.Y.F. (In Your Face)," that was on the band's demo, The Return. Don't worry though, if you don't have it you're not missing much. It's an instrumental and it's kind of "meh..."
Posted by The Old Man at 1:47 PM