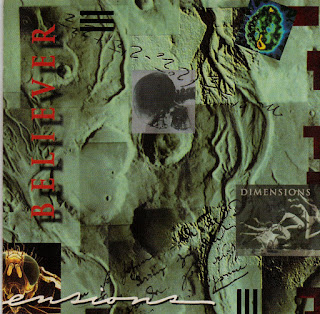 Believer - Dimensions
1993, REX
1. Gone
2. Future Mind
3. Dimentia
4. What Is But Cannot Not Be
5. Singularity
6. No Apology
7. Trilogy of Knowledge, Intro: The Birth
8. Trilogy of Knowledge, Movement I: The Lie
9. Trilogy of Knowledge, Movement II: The Truth
10. Trilogy of Knowledge, Movement III: The Key
Being a huge music fan I develop some odd associations. Take this album for example. I remember listening to it while taking walks in my neighborhood as a freshman in high school, then coming home and watching Star Trek: Deep Space Nine on TV. So whenever I listen to this I think of that. Anyone else? Just me? Yeah, I thought so. Anyway, Believer has always been an experimental band. Even on their debut they weren't content to crap out mediocre thrash songs and call it a day. That being said, Dimensions is far more experimental than any past release. Odd time signatures and strange samples abound as well as lyrics steeped in philosophy and Christian apologetics. Really though, it's the classical/metal/opera "Trilogy of Knowledge" that makes this a disc to own. Vocalist Kurt Bachman and soprano Julianne Laird trade off lines and along with the violins and distorted guitars make this a compelling feast for the ears. There are two different covers depending on whether you get the REX Records edition or the Roadrunner edition. I think I like the REX cover the best, which is the one that's pictured.
Useless Fact: The song "No Apology" is about all the guff they got from Christians because they would drink alcohol when they toured in Germany despite the fact that drinking is a part of German culture. Yeah... what can I say... we're idiots sometimes.
Posted by The Old Man at 1:59 PM