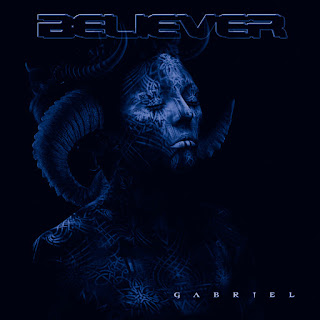 Believer - Gabriel
2009, Cesspool/Metal Blade
1. Medwton
2. A Moment in Prime
3. Stoned
4. Redshift
5. History of Decline
6. The Need for Conflict
7. Focused Lethality
8. Shut Out the Sun
9. The Brave
10. Nonsense Mediated Decay
11. Untitled Track 1
12. Untitled Track 2
13. Untitled Track 3
Believer is back, baby! After a sixteen year hiatus Kurt, Joey, and the boys bring us an album that is a stunning example of the experimental thrash the band excelled in over a decade before. I can honestly say they have not lost one ounce of talent or creativity. What's so great about Gabriel is how it manages to sound completely different from the rest of their albums but still retain their essence. You have songs like "Stoned," "Medwton," and "Focused Lethality" that are at once familiar yet new at the same time. Then you have some of the more experimental tracks like "Shut Out the Sun," "The Brave," and "Nonsense Mediated Decay." The unorthodoxy the band revels in finds itself, not in epic opera numbers, but in odd combinations of sounds that are vaguely unsettling - almost as if you've entered a world of music not entirely made by humans. The aforementioned "Nonsense Mediated Decay" is especially foreboding as the organs, throat singing (or is it a didgeridoo? I can't tell...), and guitars combine with someone detailing their encounter with a UFO. It's all very "off" for lack of a better word, but in a way that keeps you interested. Oh, I forgot to mention that Howard Jones from Killswitch Engage does some guest vocals on "The Brave." And don't bother with those extra tracks at the end, it's just some noise they dug up and it's not something you'll ever listen to.
Useless Fact: You might be surprised that the unique look for the cover art was achieved by using only a model, body paint, and fluorescent lights. It was not manipulated digitally at all. Cool huh?
Posted by The Old Man at 2:14 PM