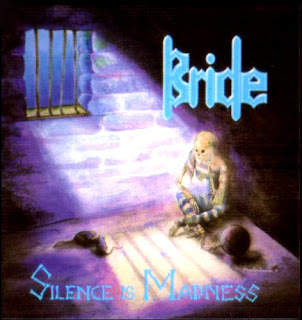 Bride - Silence is Madness
1989/2002, Golden Hill
1. Fool Me Once
2. Hot Down South Tonight
3. Silence is Madness
4. Until the End We Rock
5. Evil Dreams
6. Under the Influence
7. All Hallow's Eve
8. No More Nightmares
9. Rock Those Blues Away
Bonus Tracks:
10. Everybody Knows My Name
11. Same Ol' Sinner
Silence is Madness has the distinction of being the very first Christian metal album I bought after I got saved (again). For that reason alone it will always have a special place in my heart. Luckily, there's plenty of good ol' fashioned metal goodness here to enjoy too. Madness continues in the tradition of dark, goth-infused metal that characterized the last release. Though now they're expanding their sound a bit to include some bluesier numbers like "Hot Down South Tonight" and "Rock Those Blues Away." "Under The Influence" has been a Bride concert staple for years. My copy is the rerelease from some Brazilian label called Golden Hill. It's got the two tracks that were on Bride's "best of" CD, The End of the Age, as well as some Dale Thompson solo material. The Age tracks are nice to have, but the other stuff... it's terrible. I didn't even bother to list those tracks as a conscious display of my disdain for them.
Useless Fact: "All Hallow's Eve" is about Halloween. It's not about the Great Pumpkin though...
Posted by The Old Man at 9:53 AM