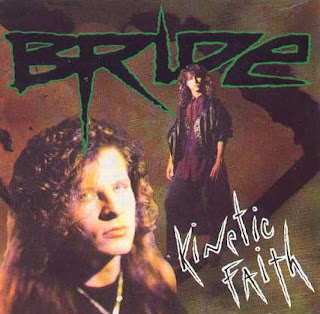 This marks the first time Bride redefined themselves - a practice that would become a downward spiral prompting them to make complete garbage albums like Fist Full of Bees. Luckily, this change is actually pretty good. Kinetic Faith is a solid hard rock/metal album that revels in the blues influence we saw foreshadowed on the "best of" and Madness. Songs like "Troubled Times" and "Ever Fallen In Love?" are pretty heavy. "Hired Gun" starts off acoustic then ends with an explosive hard rock finale. I also like the lyrics and theme of that song (about an assassin) - very creative! They also threw a ballad in there "Sweet Louise" probably so they could get some radio airplay. It's at the end so feel free to skip it... I know I do.

Useless Fact: Hey, look! The explanations are back! I don't think they're as necessary on this one as they might have been before. At this point Bride wasn't being so opaque with their lyrics.
Posted by The Old Man at 10:05 AM