Bride - "Snakes in the Playground" 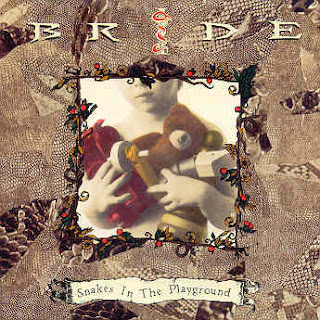 Bride - Snakes in the Playground
1992, Star Song
1. Rattlesnake
2. Would You Die For Me?
3. Psychedelic Super Jesus
4. Fallout
5. Saltriver Shuffle
6. Dust Through a Fan
7. I Miss the Rain
8. Don't Use Me
9. Picture Perfect
10. Love, Money
11. Some Things Never Change
12. Goodbye
Bride were kings in the Christian metal scene after Kinetic Faith came out. So what do they do? The altered their style a little so they sounded like Guns N' Roses. Eh... okay, I'm game. Truth be told I think they did GNR better than GNR did by '92. Seriously, this is one awesome hard rock platter. I think Dale Thompson's writing improved by leaps and bounds as well. There's some pretty cool wordplay and the lyrics are creative without being cliche or preachy. Of course, we've got some label-pandering ballads but even those aren't too bad. All in all a classic. I got to see the band live when they came to Kingdom Bound at Darien Lake. They totally rocked the house.
And as for my odd affinity for detailing my strange associations with music, I'll tell you this. I went on a field trip to Gettysburg with my eighth grade history class in the fall and listened to this and The Choir's Circle Slide all the way there and back. Guess what I think of when I listen to this disc?
Useless Fact: Some editions of this CD came with an extra disc with extra tracks on it. I never got one of those though. One of those extra tracks was "Same Ol' Sinner." I'll never understand why they didn't put that rippin' tune on any official album. Fools!
Posted by The Old Man at 10:16 AM