Coheed and Cambria: "In Keeping Secrets of Silent Earth: 3" 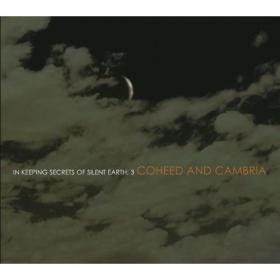 Coheed and Cambria - In Keeping Secrets of Silent Earth: 3
2003, Equal Vision
1. The Ring in Return
2. In Keeping Secrets of Silent Earth: 3
3. Cuts Marked in the March of Men
4. Three Evils (Embodied in Love and Shadow)
5. The Crowing
6. Blood Red Summer
7. The Camper Velourium I: Faint of Hearts
8. The Camper Velourium II: Backend of Forever
9. The Camper Velourium III: Al the Killer
10. A Favor House Atlantic
11. The Light & the Glass
12 2113
Upon first listen it seems like this album has the exact same problem as the last album. Namely, having a couple really catchy memorable songs ("Blood Red Summer" and "A Favor House Atlantic") and a bunch of forgettable progressive stuff. However, I found that the more I listened to this one, the more I appreciated what was there and found hooks in unexpected places. I loved the power of "MAN YOUR OWN JACKHAMMERS!" and the metal riff that goes with it ("In Keeping Secrets of Silent Earth:3"). I like how "The Crowing" starts off slow and builds into a frantic emotional plea ("Dear Ambelina/ The Prise wishes you/ To watch over me!") Also the three Velorium Camper songs are awesome. Each has its own personality and is the highlight of the disc for me. While this probably isn't my favorite Coheed disc, I still recommend it as there is a lot of great music to digest here.
Useless Fact: There's some story in all these vague lyrics but I don't have the foggiest idea what it's about.
Posted by The Old Man at 7:57 AM