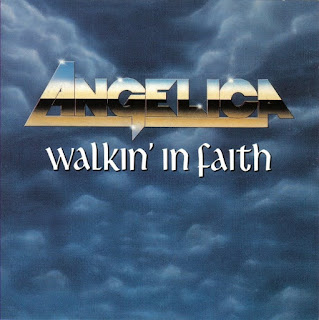 I've never really been into Angelica that much. Dennis Cameron certainly impresses with his guitar skillz, but I've never really counted this band as one of my favorites. I don't know why. Their first album was alright, but I think I actually like this one better. New vocalist Jerome Mazz has this helium high voice but it's not obnoxious. The other thing that struck me about this album is how prominent the bass is. Usually with a guitar virtuoso like Cameron you'd think guitar would take center stage and drown out the bass - not here though, it's pretty cool actually.

Useless Fact: Angelica only made one music video for "Cover Me" which appeared on Rock, Stock, & Barrel. That song was really cool. Too bad the rest of the album was so boring.
Posted by The Old Man at 10:49 AM