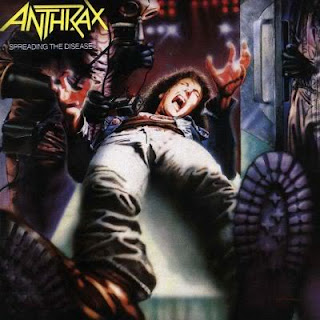 Anthrax - Spreading the Disease
1985, Island
1. A.I.R.
2. Lone Justice
3. Madhouse
4. S.S.C./Stand or Fall
5. The Enemy
6. Aftershock
7. Armed and Dangerous
8. Medusa
9. Gung-Ho
It's kind of strange to think of thrash with soaring melodic vocals, but that's exactly what you've got with this disc. Joey Belladona does a great job on every song. It's easy to see why they became one of the "big 4" of thrash. Though, dare I say, these songs are a little more um... power metal-y than what would come later. That's okay though it's still plenty heavy even though the mastering is awful - very tinny and noisy, but I think that's just how they rolled in the mid-80's!
Useless Fact: The song "Lone Justice" begins the band's love affair with Stephen King books. This one is based on The Gunslinger.
Posted by The Old Man at 7:46 AM