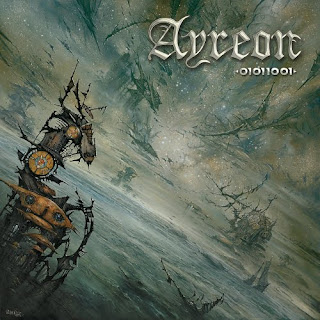 Ayreon - 01011001
2008, InsideOut
Disc One: Y
1. Age of Shadows (incl. We Are Forever)
2. Comatose
3. Liquid Eternity
4. Connect the Dots
5. Beneath the Waves
a. Beneath the Waves
b. Face the Facts
c. But a Memory...
d. World Without Walls
e. Reality Bleeds
6. Newborn Race
a. The Incentive
b. The Vision
c. The Procedure
d. Another Life
e. Newborn Race
f. The Conclusion
7. Ride the Comet
8. Web of Lies
Disc Two: Earth
1. The Fifth Extinction
a. Glimmer of Hope
b. World of Tomorrow Dreams
c. Collision Course
d. From the Ashes
e. Glimmer of Hope (reprise)
2. Waking Dreams
3. The Truth is in Here
4. Unnatural Selection
5. River of Time
6. E=mc2
7. The Sixth Extinction
a. Echoes on the Wind
b. Radioactive Grave
c. 2085
d. To the Planet of Red
e. Spirit on the Wind
f. Complete the Circle
Ayreon's latest disc is in much the same vein as The Human Equation. The songs, while epic and progressive, are focused and tight with a lot more emphasis on hook and a lot less wandering. This album is darker than its predecessors and includes murky and moody tunes like "Comatose" and "Waking Dreams." I also like that there's more Celtic influences akin to Equation as well - "River Of Time" is similar to "Day Sixteen: Loser" being almost a folk metal song. I'm told that Arjen Lucassen was going through some rough times which is why the album is so dark both musically and thematically. After all, the album is essentially about the extinction of the human race. We've also got a bevy of cool guests on this album with Hansi Kursch (Blind Guardian), Ty Tabor (King's X), Tom Englund (Evergrey), Jorn Lande, and hey... look at that... Anneke van Giersbergen is back! Yay! After The Human Equation, this is my next favorite Ayreon disc. Can't wait for the next one!
Useless Fact: Jeff Bertels painted the cover art for this album. He's also painted the art for most of Ayreon's covers all the way back to Electric Castle.
Posted by The Old Man at 10:52 AM