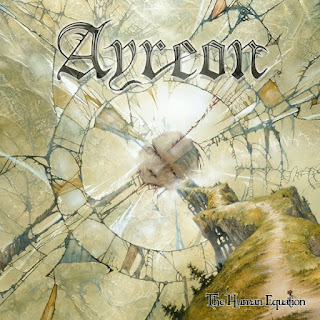 Ayreon - The Human Equation
2004, Inside Out

I think out of all the Ayreon discs, this is my favorite. It's a return to form after the more experimental Migrator album(s). Overall I'd say The Human Equation is a bit more focused than any Ayreon offering to date as well as being heavier. This is due in large part to the downtuned guitars which give the songs a more modern edge I think. It still makes my metal heart happy though! There are hooks all over the place and it's so chocked full of great guest stars it's not even funny. Let's see, we've got James LaBrie (Dream Theater), Eric Clayton (Saviour Machine), Devin Townsend (Strapping Young Lad), Mike Baker (Shadow Gallery), Mikael Akerfeldt (Opeth), and Devon Graves (Dead Soul Tribe). There's so much talent here it almost threatens to rip a hole in the time space continuum! The story eschews the sci-fi (mostly... wink wink!) that Arjen is so fond of in place of an emotional tale about a man in a coma facing his emotions and dealing with the consequences of the choices he has made.

Useless Fact: My edition came with the extra DVD with the "making of" stuff on it. This album was also a spring board for vocalist Marcela Bovio and Arjen Lucassen to form Stream of Passion a few years later.
Posted by The Old Man at 9:47 AM