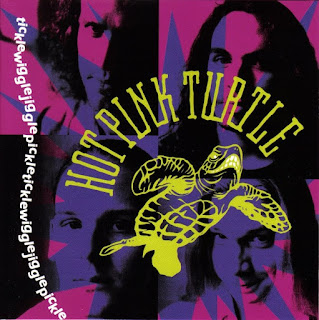 I was first introduced to Hot Pink Turtle's eclectic brand of rock on REX's Demolition comp back in the day. I loved "Glide" and snagged this (on tape, mind you) as soon as I saw it. HPT are a combination of metal, rock, alternative, and ...funk? I dont' know. Sometimes it seems like they just threw a bunch of riffs into a hat and picked them out at random. Here's the weird thing though... it totally works. You'll be grooving to some Red Hot Chilli Peppers inspired funk section only to have the band switch over to some full throttle metal goodness with vocalist, Jamin Rathbun, screaming his head off like a metal god. This is another one of my beloved "Freshman year of high school" albums that gets listened to a lot in the fall. The bassist for HPT, Dion, used to frequent the old Deliverance board and tell us crazy stories of his HPT days... man those were good times. If you want to check them out go to Jamin's blog, www.superdink.com/06_12_31.html. He's got this album as well as the band's early demos and even the demos for their second album, Horsechild, that was never finished. The best part is that he's just giving 'em away all free-like, and since it's his band, it's legal. Go over there for some free music!

Useless Fact: The song titles? They were made last and never had anything to do with the song. Each one has a story behind it as per Dion. Wish we had those stories up somewhere... *sigh*
Posted by The Old Man at 10:17 AM