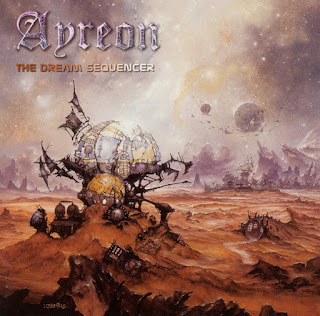 Ayreon - The Universal Migrator, Parts I & II
2000, InsideOut
Disc One: The Dream Sequencer
1. The Dream Sequencer
2. My House On Mars
3. 2084
4. One Small Step
5. The Shooting Company of Captain Frans B. Cocq
6. Dragon on the Sea
7. Temple of the Cat
8. Carried By the Wind
9. And the Druids Turned to Stone
10. The First Man on Earth
11. The Dream Sequencer Reprise
Disc Two: The Flight of the Migrator
1. Chaos
2. Dawn of a Million Souls
3. Journey on the Waves of Time
4. To the Quasar
a. The Taurus Pulsar
b. Quasar 3C273
5. Into the Black Hole
a. The Eye of the Universe
b. Halo of Darkness
c. The Final Door
6. Through the Wormhole
7. Out of the While Hole
a. M31
b. Planet Y
c. The Search Continues
8. To the Solar System
a. Planet of Blue
b. System Alert
9. The New Migrator
a. Metamorphosis
b. Sleeper Awake
Ol' Mr. Lucassen tries something different for this album. This collection was actually two seperate albums when it was originally released. The Dream Sequencer was the progressive/psychedelic one where as The Flight of the Migrator was supposed to be the heavy one. He figured fans could just buy the one they liked. I like the idea but it works better in theory than practice. Dream Sequencer is good, but loooong and slow and not exactly overflowing with hooks. "My House On Mars," my favorite tune, is an industrial influenced dirge and my other favorite, "The First Man on Earth" is a sort of a bouncy Beatles-esque song. I like this disc, but it's more background music or "chill out at the end of the night" music than it is something you can jam to in your car. Flight of the Migrator, on the other hand, is friggin' metal from start to finish. From the opening notes of the frenzied "Chaos" to the pounding closing track - it doesn't slow down too much. Bruce Dickenson from Iron Maiden does a stunning job on "Into the Black Hole." I'm not sure who sang "Dawn of a Million Souls" but he's awsome too. Having said all that, I kind of like it better when all Arjen's elements are melded together rather than separated - but that's just me.
Useless Fact: For those who care about the actual story, you'll notice that the Migrator passes over the Planet Y - home to "Forever." You'll also notice that it mentions machines covering up the ground despite the fact that later in 01011001 Y is described as an aquatic planet. All hail nitpicking!
Posted by The Old Man at 9:19 AM