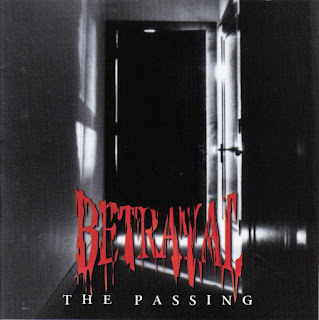 Betrayal - The Passing
1993, Wonderland
1. Renouncement
2. The Usurper
3. Carnival of Madness
4. Ichabod
5. Forrest of Horrors
6. Race of Hypocrisy
7. As I Turned Away
8. Whispers of Chaos
9. Strength of the Innocent
10. Retaliatory Strike
11. Frantic
The Passing, if you can believe it, is actually darker than the band's previous effort. Keep in mind the last album had a song about a woman sacrificed by a satanic cult and this album is darker. Let's see we have a song about a man committing murder, then dying in jail and going to hell ("The Usurper"). We have a song about how America has lost its former glory ("Ichabod"), a follow up to "Escaping the Altar" ("Forest of Horrors") and if there was still some little light left there's a song about someone killing themself ("Whispers of Chaos"). So yeah... lots of dark themes. Granted it's all about avoiding such situations and how our choices can result in some bad consequences, but dang.. it's dark. The music itself is more technical, I think. There's a little industrial influence in "Renouncement." I also think that Chris's vocals have improved immensely - they fit like a glove now instead of being awkward. Chris Scott from Precious Death and Jimmy Brown from Deliverance provide some guest vocals as well. Basically, if you liked the first one, you'll like this one too. If not, The Passing, ain't gonna change your mind any.
Useless Fact: The liner notes for this album had some words in bold print. Supposedly you were to take the bold words and figure out what scripture it was. I copied all the bold words down and I could never figure out what the scripture was. I wonder if anyone actually won that CD player?
Posted by The Old Man at 9:57 PM