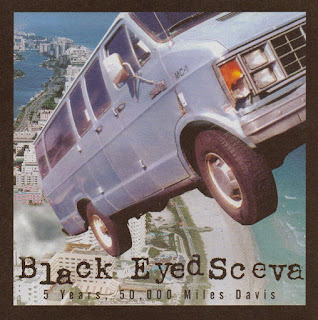 Black Eyed Sceva - 5 Years, 50,000 Miles Davis
1996, 5 Minute Walk
1. Ryan's Driveway
2. Ecumenical
3. Twain
4. Soapbox
5. Confirmation Day (Live)
6. Adrien James (Live)
7. Nailholes (Live)
8. Invisible Sun (The Police cover)
I'm not sure why the band put out this little EP. The four new songs all sound like outtakes from Way Before the Flood. "Ecumenical" deals with divisions in the church and treds absolutely no new ground. "Twain" is an interesting track. Apparently it's a fiery condemnation on of some book of Mark Twain's. You know I used to live in the town where he is buried - not that that has anything to do with anything! The live tracks are okay - they're well recorded and sound good, but they're nothing special. Even the cover of Invisible Sun is merely "okay."
Useless Fact: I guess the band got tired of explaining the name Black Eyed Sceva to people because after this release they changed their name to Model Engine.
Posted by The Old Man at 8:52 AM