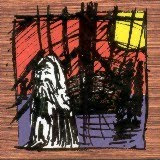 Black Eyed Sceva - Way Before the Flood
1995, 5 Minute Walk
1. Justified
2. WBF
3. Mudhouse
4. Cleverness
5. Adrien James
6. Primrose
7. Happy Face
8. Comte's Perspective
9. Handshake
10. Confirmation Day
11. Nail Holes
Here was a little surprise. Black Eyed Sceva play college alternative rock. I say college because the lyrics are kind of philosophical, pondering, and at times a little self-righteous - basically what everyone's attitude is in college because we think we know everything! That being said there is some good stuff to be had here, lyrically. They cover topics dealing with premarital sex ("Mudhouse"), single-parent homes ("Adrien James"), and even AIDS ("Handshake"). The music is similarly thought provoking and the guitar work is interesting throughout. It's cheap now, so you can pick it up for pennies - and I recommend that you do.
Useless Fact: The name Black Eyed Sceva is taken from the seven sons of Sceva from Acts...7? I think? They tried to cast out demons in the name of Jesus and Paul. They scored an epic FAIL when the demon possessed man beat 'em down.
Posted by The Old Man at 8:40 AM