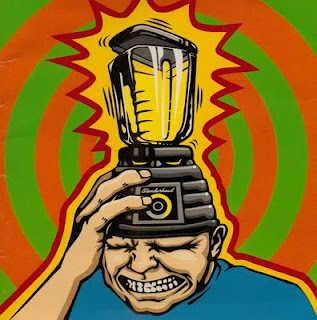 Blenderhead - Prime Candidate For Burnout
1994, Tooth & Nail
1. Escape Reason
2. Cesspool
3. Power Trip
4. Bottle Breaker
5. Let Down
6. Alcohol House
7. Purgatory
8. Internalize
9. Soap Box
10. Spare Change
11. National Drug
12. Choice
I have no idea what to call this. Post-punk maybe? It's rare that I'm at a loss for words when describing music. This is aggressive, caustic, and powerful. Blenderhead demands your attention and presents you with music that under normal circumstances would be unlistenable but somehow manage to refine all that noise into something amazing. In fact I would almost say that the guitars produce more fuzz and feedback than they do actual notes... and yet... it remains melodic and musical. Definitely ahead of its time. Too bad none of their followups managed to be nearly as good.
Useless Fact: The band took some heat over the artwork inside the CD. People got all up in arms over a picture of a "shrine" made out of Coca-Cola cans and a picture of someone's butt crack that was censored by the label. Why? Apparently nobody had anything better to do.
Posted by The Old Man at 5:09 PM