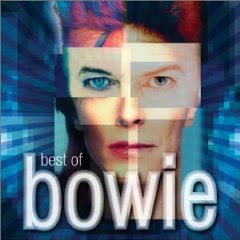 Bowie, David - Best of Bowie
2002, EMI/Virgin
1. Space Oddity
2. Changes
3. Suffragette City
4. Ziggy Stardust
5. The Jean Genie
6. Rebel Rebel
7. Young Americans
8. Fame
9. Golden Years
10. "Heroes"
11. Ashes To Ashes
12. Fashion
13. Under Pressure (w/ Queen)
14. Let's Dance
15. China Girl
16. Modern Love
17. Blue Jean
18. Dancing In the Street (w/ Mick Jagger)
19. This Is Not America (w/ The Pat Metheny Group)
20. I'm Afraid of Americans (V1)
I'm not a huge fan of David Bowie, but I do like enough of his songs that I was motivated to snag this "greatest hits" collection. It's got pretty much all the songs you've probably heard on the radio. It also turned me on to some of his other tunes like "Ashes to Ashes" that I'd never heard before but instantly liked. It's also nice to have the industrial tinged "I'm Afraid of Americans" available. Trent Reznor helped out on that one and you can tell - it sounds like NIN with David Bowie on vocals.
Useless Fact: There's a two disc version of this collection with more songs out there, but as you can see I didn't care enough to track that one down.
Posted by The Old Man at 3:24 PM